God and Zen, Can This Work? 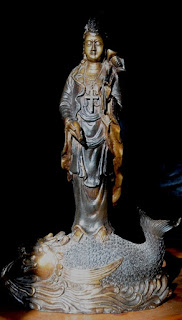 Many years ago when I was the registrar for PZi, I contacted a local (mainline) protestant church to see if we could post a flyer on their bulletin board about our upcoming retreat . The secretary was very pleasant saying that she had to clear this request with her pastor, that he was away right now and would get back to me. A few days later, since I was in the neighborhood I dropped by the church to see about our request. The secretary informed me that we could not post our flyer. Then she said her pastor told her that "...Buddhists are people who worship trees...that our flyer would be inappropriate for their bulletin board."


We worship trees? His response surprised me at its ignorance. Had he also called us pagans, that too would have been an inadequate response.


Most 12-Steppers have a God in their lives. Regarding the book Alcoholics Anonymous, since "Its main object is to enable you to find a Power greater than yourself which will solve your problem" (P.45). Finding a Higher Power is critical for recovery, and at the same time, there are those who come to believe by not believing. There's a story around here about the weekly Atheists and Agnostics Group that was started more than 20 years ago. The joke is that all they talked about at this meeting was God.

God and Zen, can this work? 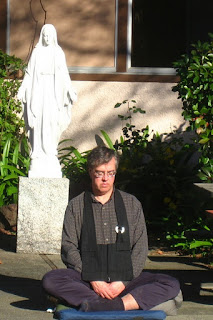 That there are Zen Masters in the United States who also happen to be Rabbis or Catholic Priests is evidence that absolutely YES, we can have a God in our life and practice Zen, too. One of our PZi members is the minister of a local protestant church where, besides his ministry, he also teaches Zen koans and is creating Christian koans to boot. I don't try to figure out who God is, nor how Zen works. What I have found is that this God/Zen combination is extraordinarily beneficial -- a symbiotic relationship for me -- where no longer can I practice one and not the other.


Here's a photograph of David, a United Church of Christ minister, meditates in the warm morning sun at a 7-day Zen retreat held at a Catholic facility.


Nyogen Senzaki (1876-1958) was one of the early Japanese Zen Masters to come to the United States. He used to wonder why Americans kept asking him, "What do you believe in? Who do you worship?" His reply went something like, "We in Zen don't believe in anything, we understand. We don't worship anything, we practice."

How fortunate for us! Zen doesn't tell us we have to believe in something and Twelve Step programs tell us that we may choose what to believe. By practicing the Twelve Steps and Zen Koans, we've been given the gift to believe and understand, which just may put us at a distinct advantage for finding joy and freedom in our lives.