The Treasure of Step 2 Opens of Itself

Step 2:  Came to believe that a Power greater than ourselves could 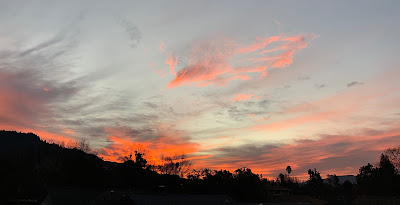 restore us to sanity.
Koan: The storehouse of treasures opens of itself. You may take them and use them any way you wish.

From Dogen’s “Recommending Zazen to Everyone” and a part of the Misc. koan collection.

For some who are still familiar with the religion they grew up with, or are still a church member, Step 2 may come easy, as it’s already a part of their consciousness and not a hurdle. Perhaps it’s just a reminder that their church is still available to them.

Not so for many others.  Step 2 is a hurdle or even a seemingly in penetrable barrier, so it’s fortunate that the writers of the Big Book cut us some slack by using the words came to believe. Dale remarked, “I didn’t have to come to find God in Step 2.” 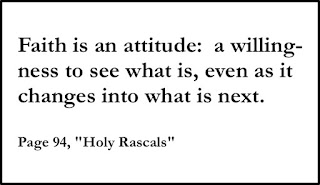 Thank goodness we aren’t asked to make this leap of faith immediately.  All we have to do is think that it may be a possibility further down the line.  We can even gloss over Step 2 with a lets-just-see-what-happens attitude.

Elsie said she came into AA totally disconnected. “My life was over but certainly not unmanageable.” We laughed.  “I complained and complained and complained to my sponsor about others in AA and then she would ask, ‘How are you like them?’” Arrgghh! Then we came to Step 2 “despite the “Came to believe” part. “I took my time with this Step until I realized it was a promise – and the door opened by itself.


A Power greater than ourselves… 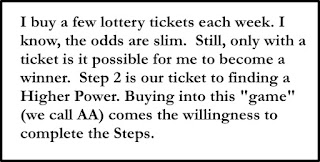 The main object of the Big Book (Page 45),  “…is to enable you to find a Power greater than yourself which will solve your problem.” We don’t realize it at the time; but a storehouse of treasures has been given to us when we take Step 1. Step 2 is merely the beginning of this process. The “treasure box” is beginning to open.

Dale’s enthusiasm was apparent when he said, “This is the best of koans to match with Steps 1, 2, and 3,” Treasures are a part of my morning meditations.”  Just like the Buddha, the Dharma, the Sangha are called the Three Treasures, his morning treasures are the Dharma, the Steps and “that which supports me.”


Restore us to sanity 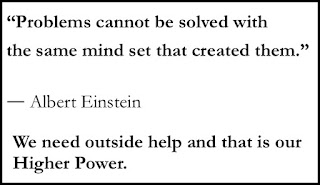 They’re telling me I’m insane? Yes I am, we all are.  We don’t arrive here open-minded, clear headed, and considerate of others. In fact, we’re the opposite and this leads to our insane thinking.

Dale freely admitted that he had been insane all his life, before coming to AA. “How could I be restored to something I had never experienced?  The focus for me was finding sanity.”

With a smidgeon of willingness we acknowledge Step 2 on a spectrum of “belief levels” (A scale of 0 to 10?), then time to move on.  We may not see it yet but this is a gift.  A treasure actually! It’s the continuing to work the Steps with our sponsor, and in listening to what others say about this process we are given these Step treasures, with each treasure building upon the other.

My storehouse is growing. “Having had a spiritual awakening” in completing Step 12 I realize the storehouse of treasures have been given to me freely. And because my goal now is to do the next right thing, I can take them and use them any way I wish

No matter how you “work” Step 2, by moving on to the next Step, “sometimes quickly, sometimes slowly”, it’s bringing you into closer contact with a Power greater than yourself. Look around, it sure seems to be working for a lot of other people in the room …you will come to believe in a Higher Power of your own understanding by being grateful for how the Steps are changing your life. Maybe it’s time today to give thanks for your treasures; one of them being restored to sanity.

As we were straightening thing up getting ready to leave, we all agreed – the 12 Steps are a miracle.