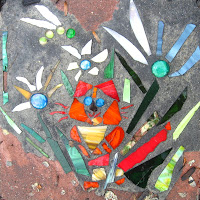 
Once I heard that you cannot arbitrarily attach koans to anything... ummm ... but that's what I've done here, this is what the project is all about. Well, sort of. We do what we do what we do. So I've assigned certain koans with the Steps, to see what happens.

That's not completely correct, the assign part, because some of these koans seemed to assign themselves! This is how it happened for me where I realized the koan that I had heard on a Monday evening of meditation stirred up all sorts of thoughts around Step 3.

The koan's relationship with Step 2 came to me while at a 7-day retreat. A friend told me the koan that jumped into his mind around Step 1. I had originally chosen a different one but
his was much better since it was his actual experience. Another friend was meeting with his teacher in dokusan (at PZi we call this Work In The Room instead). He revealed how the koan
he was working on came to relate with Steps 5 and 6.

This leaves us with the other koans here, the ones I've chosen. Never underestimate the potential of a koan. I know this to be true and that all koans are potentially useful. That they will stir up a Step for you remains unknown. But later on, maybe something different will happen.

For sure, I am not a koan master; but I have had the experience of working with several hundred of them. As I sit with koans, in the back of my mind are also the 12 Steps and my experiences with them. Either consciously or unconsciously the question arises: "Does this koan remind me of the Steps at all?" At times, by meditating with these koans, a glimmer of possibilities appears -- not an ah-ha moment as it has been for others; but that "this one" just may work for others. Certainly not cast in stone, I know the koans I use here will change and evolve over time.

The other people mentioned here who have had specific Step/koan awakened moments are all long-time Zen students in the koan tradition. Their experiences, I reiterate, are koan-driven and not something thought up.

It's only a matter of time and practice where YOU will also experience the effects of a koan with a Step. The koans I have chosen may do this for you; the koans my friends experienced may do this for you; or it may be a loan you've heard from elsewhere. If you already work with koans, whose to say that it may appear disguised as a Step.