...we'll be meeting on December 8th.  Here is what we'll be sitting with.


“What is spiritual awakening?  It is waking to the flow of the moment and living in harmony with it.”  Rami Shapiro, Recovery – the sacred art

Koan: Since we all have Buddha nature, why do we practice?

All beings by nature are Buddha,
just as ice and water are the same;
apart from water there is no ice,
apart from beings no Buddha.


Step 11: Sought through prayer and meditation to improve our conscious contact with God as we understood Him, praying only for knowledge of His will for us and the power to carry that out.

Koan: “The answers will come if your own house is in order.“ Page 164 Big Book 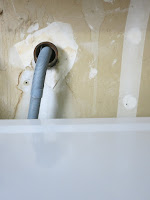 We had to call a plumber the other day after my wife noticed water a puddle of water on top of the dryer. Something was amiss; our house was not in order.

Delving into the matter, I had to pay attention to what was happening. Paying attention – it’s the operative word for solving this plumbing problem, as well as how to go about integrating Step 11 into my daily life.

We started another load of laundry.  As the washer discharged water I could see water bubbling out of the drainpipe onto the dryer.  We have a plugged pipe somewhere, but where is the stoppage?

Opening the clean-out pipe outside the kitchen window I discovered that (1) water flowed freely from our kitchen sink into the outside pipe and (2) it flowed freely outside when I took a hose and ran water into the washer’s drainpipe.

The stoppage was somewhere between the kitchen and our sewer. I called our plumber.  His "roto-rooter" device reached its end, fifty feet and still had not reached the obstruction.  One more try, he went under the house and tapped on the pipe where the blockage was.   Luck was on our side, the trapped gunk broke free and "whooshed" down the pipe into the sewer line. He cleaned out the affected pipe; our house is in order (at least pipe wise).

At the end of our 11th Step meeting we read the St. Francis Prayer.  It begins with, “Lord, make me a channel of thy peace…”

There’s a company that used to be called Clear Channel.  The name "Clear Channel" came from AM broadcasting, referring to a channel (frequency) on which only one station transmits.  This meant no interference from any other channel.  That’s what I want in my mind with the 11th Step…no interference from distracting thoughts, a mind that is in order. 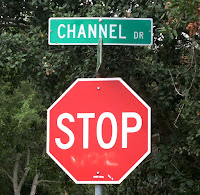 A clear channel, an open, unhindered flow between my Higher Power and me is Step 11 at its best.  This comes about by noticing, paying attention, and attending to what is present (reality). When something is obstructing this channel, my house is not in order.  Instead of calling a plumber, I’ll talk to a sober friend or call my sponsor, of course, who is more than happy to do some tapping on my behalf.

The subconscious topic of the evening seemed to entail “pipes”.  Daniel took us back to when he was new in the program.  One evening, after he came home he heard a hissing sound.  Walking around he eventually found himself under the house.  His home was on a hillside so it was easy to walk under part of his rented house.  There it was, a pipe hissing and spraying water.

There were pipes leading in every direction and multiple valves – the scene was overwhelming to him.  He didn’t know where to begin, so he went back inside thinking, “This isn’t my house, it’s the owner’s job to fix this…I’ll call him in the morning.”

This experience made an impression.  “This goofy prayer showed me something,” he said, “I learned something about prayer.”

In his case, the answer came, then his house was in order.

My mind finds orderliness when I practice the 11th Step on a regular basis.  Even just a little bit of order is all I need to find answers appearing in the form of being at peace with whatever is happening.

Step 11 and a Big Book Koan

We're back and looking forward to meeting together again... and ready for this month's Step and koan:

Step 11: Sought through prayer and meditation to improve our conscious contact with God as we understood Him, praying only for knowledge of His will for us and the power to carry that out.

Koan: "The answers will come if your own house is in order."
Page 164 Big Book