In these uncertain times...

So, in the coming weeks or even months,

there may be limited or postponed postings

My computer is ten years old and it seems

has forgotten how to communicate with

itself and others (internet provider).

So far though, I can send and receive email

on my iPad. Still there's an issue where

the iMac can't send things to the iPad.

Such as it is. I trust these matters will be

be save and well.

Lost and Found in Step Twelve

Koan:  A student asked Yunmen, "What does it mean to sit and contemplate reality?"
Yunmen answered, "The coin lost in the river is found in the river."


Before I found sobriety, the phrase “Oh you poor lost soul” * frequently made its appearance in my head, and probably others thought this about me, too.

This is my sobriety birthday month where I’m finding myself reflecting upon how I got here. At its core, this excerpt from the Big Book is etched into my story: “It wasn’t how far I had gone, but where I was headed.” P. 354

On this specific December Saturday, 1986, I was leaving with my friend to run the Sacramento Marathon. As I left home, a phrase from my wife’s parting words stuck: “Someone in this family is an alcoholic!”

Her words recirculate in my head all of Saturday, into the evening as I drank a bottle of wine, and well into the night. Sunday race day we were up early – the temperature was near freezing when we started but once the race began and we had found our pace our bodies warmed up – we broke four hours (a record) – the race went well, followed by the usual aches and pains. Then we drove the three-hours home.

Between December 7th race day and December 9th, something happened. Did I run instead of sit and contemplate reality? Clarity had opened me up. What if “I didn’t have to drink anymore?” P. 354. I knew nothing about AA at the time; but for years, in the back of my mind, I knew there were these places called treatment centers. Sometime between Sunday evening and Monday morning I had made a decision – on Tuesday, December 9th I checked myself into St. Rose (long since closed).

“So our troubles, we think, are basically of our own making.” P. 62 I was the cause of my lostness! When I made that decision to go into treatment, I had taken Step One without knowing there was such a thing. 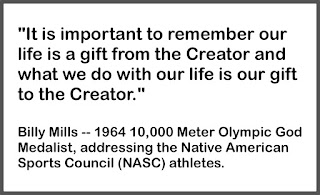 It was there I began my journey in recovery – a journey of learning how to find myself, to discover my True Nature, something that’s always been with me but hidden by my ignorant and delusional ways. I had been lost in the river of my life.

“The coin lost in the river is found in the river.” I’ve found myself in the 12 Steps and Zen Buddhism, not by looking outward; but by consciously sitting with reality and my HP one day at a time.

Chuck, my longtime running and now hiking buddy sent me this from Robert Ellsberg’s collection “Blessed Among Us”:

“On December 10, 1968, the Trappist monk Thomas Merton died in Bangkok at a conference on monasticism. In setting forth on this journey he had written, “May I not come back without having settled the great affair. And found also the great compassion….I am going home, to the home where I have never been in this body.” On this trip he met with Buddhist and Christian monks and experienced an epiphany in the presence of an enormous statue of the dying Buddha. Exclaiming that this was the purpose of his trip, he wrote, “Everything is emptiness and everything is compassion.” He died later that week from an apparent accidental electrocution.”

For us alcoholics, Step 12, in some ways, is our greatest affair. By practicing the principles if all our affairs, we find the great compassion, too.


* I had not found Zen yet. Today I would say you poor lost soul and hungry ghost.

Sobriety brings me joy and happiness AND I must take my recovery practice seriously. If I don't take it seriously, chances are I would lose it all. The hear the following at the close of each day in retreat, a message from the ancestors.  It's also a good thought to carry as 2020 comes to a close and we enter into the new year, 2021.

Just in, a contribution from Joanie:

“I was on a slippery rock in a rising tide of loss.

I craved change,
but turned away from it,
then drowned in contradictions.

Rock bottom became my solid foundation
on which to build my new life.”

Hope you are safe and well.

Koan:  A student asked Yunmen, "What does it mean to sit and contemplate reality?"