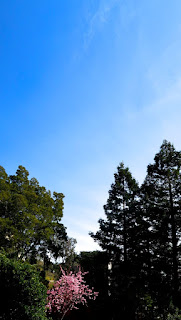 Koan: Lingyun was wandering in the mountains and became lost in his walking. He rounded a bend and saw peach blossoms on the other side of the valley. This sight awakened him and he wrote this poem:

For thirty years I searched for a master swordsman.
How many times did the leaves fall
and the branches break into bud?
But from the moment I saw the peach blossoms,
I’ve had no doubts.

Centuries later the Japanese teacher Keizan responded with his own poem: 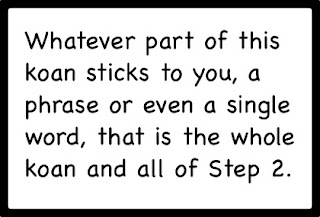 The village peach blossoms didn’t know
their own crimson
but still they freed Lingyun
from all his doubts.
Like so many things in my life, Step 2 is an example of how fruitless it is to intentionally go after something. I can’t say to myself, “Today I’m going to believe that a Power greater than I will restore me to sanity,” and then go make it happen. This would be like Lingyun saying, “Today on my walk I’m going to become enlightened.”

This is what he was saying in his poem after he had become awakened by seeing the peach blossoms – For thirty years I searched for a master swordsman…Is it over there? Is it behind that tree? Is it at night? How about if I hold my hands thusly? Searching, searching, searching to no avail.

In his searching, he had an agenda, a goal he yearned for. We could say there’s such a thing as speed searching, which would be the sport of orienteering. There’s no such thing as speed wandering, though. The key may be in giving up the search and not trying to take everything in, dare I say know everything? He became lost in his wandering – perhaps not knowing his whereabouts and not even knowing what he was looking for.


“For me, sanity means clarity, clear seeing.” There was nothing sane about my upbringing at all, an insane childhood, insane parents, insane growing up, and insane adulthood. So how could I be restored to something I had never had? The whole thing about sanity was huge for me. I had to be taught over many years how to be sane – how to find clarity, clarity seeing the truth, clarity seeing the peach blossoms in my life. For the first 10-15 years in my sobriety, everything was a power greater than myself. Dale H.

Unconsciously getting out of his own way and putting down the obstacles in his mind was all it took to be open to the sight of the peach blossoms. Lingyun had no doubts. He came to believe.

Lingyun was completely in the moment when he saw the peach blossoms, awakening to ultimate awareness. In Step 2, we “come to” awareness, an awakening, where all this makes perfect sense. There IS a solution here.   John S.

There’s something else going on here, too. Long dormant on a shelf, I threw an old book into my car for reading before meetings. It’s The Three Pillars of Zen by Philip Kapleau.

Early in the Editor’s Introduction section, it reads: “Zazen can in fact be effective [attaining awakening] even in a chair or on a bench or while kneeling…” (and Lingyun has shown awakening can happen when wandering.

It goes on to say, “What ensures success in the quest for enlightenment is not a particular position but an intense longing for truth for its own sake.” Lingyun had this longing and so do we in working the Steps in our quest to find sobriety and find our Higher Power.


Sitting here with my eyes closed, I noticed a slit of light coming through my eyelids. It reminded me of fire. I thought of the recent wildfires we’ve had here. Fires are certainly a power greater than me. 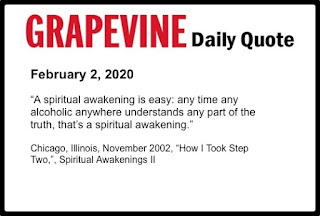 That there is a force (or forces) behind all things is easy to acknowledge; but comprehending this force is beyond my capacity.

Step 2 is taking a beginning step onto a path to believing.
You will come to believe – guaranteed – when the time is right.