October is near.  Time for Step 10 and the following koan.

Step 10: Continued to take personal inventory and when we were wrong promptly admitted it.


Koan: Both roots and branches must return to their origin, and so do respectful and insulting words.  Shitou Xiiqian
Posted by Bill K. at 9:30 AM No comments:

Steps 8 and 9, Swept Away and Still Singing

A bug on a branch

swept away down the river

I can’t remember when I saved this poem from one of Brother Toby’s weekly haiku postings. I knew I wanted to use this as a koan many months ago. Then [great timing!] a little more than a week ago, he used it again, this time from Brother Toby’s Friday Reflection, August 30, 2019. *

“Jumping ahead a few years, we are in the age of my very favorite haiku poet Issa (1763-1928). When our beloved and deeply missed Sister Marti (1936-2016) was valiantly living with pancreatic cancer, she spent wonderful times writing haiku which were later collected in her little book FROM STARDUST TO STARDUST: HAIKU – A FINAL YEAR. She chose as a kind of introduction a poem of Issa which had been translated by our good friend Cliff Edwards at Virginia Commonwealth University, with a couple of minor changes.

A bug on a branch

swept down the river

Marti’s experience and this haiku bring to mind many people who were in one way or another defeated in the big life story but who, thanks to a little violet, were able to keep singing their songs in the most desperate of situations. The psychologist Etty Hillesum (1914-1943) found a little blue flower outside the barbed wire before she was murdered at Auschwitz. The university student Sophie Scholl (1921-1943) focused on the wind in the trees before she was beheaded at Munich. Anne Frank (1929-1945) stole up to the attic of her hiding place to look out at a tree before she was taken away and died at Bergen-Belsen. These people were slaughtered by the fascist regime of the 20th century. Yet each, like our Sister Marti would not let death itself defeat them. Even in those dire circumstances they all kept singing their song. And each one of us can do the same thing if we look for that little violet and the present moment, the now-moment, out of which it grows.”

Yes, I told my sponsor that I was willing to go to any length because I wanted this thing called sobriety. But Step 9 can feel like one is being swept away.  I know what needs to be done; but it’s scary not knowing how it will all turn out.  What will I do when there’s no turning back? I do know that prayer beforehand will help.

As the Big Book says, these conversations we have with those we have hurt don’t always go smoothly.  Still, we go through with it knowing we have the backing of our sponsor, the fellowship of AA and our Higher Power – this is the branch we are clinging to.

When I find myself face-to-face with this other person, I become that little bug being swept down the river. How fast is the current? How wide is the river?

“If we are painstaking about this phase of our development, we will be amazed before we are half way through. We are going to know a new freedom and a new happiness.” Big Book Page 83

We are singing our song!

This evening, not only were we a zendo of two sitting with the same poem, we were singing different songs.

Initially, Dale was simply not connecting these Steps to the haiku. So he paused, did some reading and thought about the people he had harmed (Step 8) and the phrase, “…except when to do so would injure them or others” (Step 9). This brought to mind the Eightfold Path and doing no harm. Then he wondered about this poem and what it says about Issa. “He seems to revere all life, “Dale said, “Even bugs. He doesn’t try to save the bug either and allows life to unfold. This is our version of right action – this is the program working you.”

Returning to the Steps he thought about being respectful of others by not harming people in the first place so we won’t have to do Steps 8 and 9. “After some time in the program, I don’t want to have to make amends." 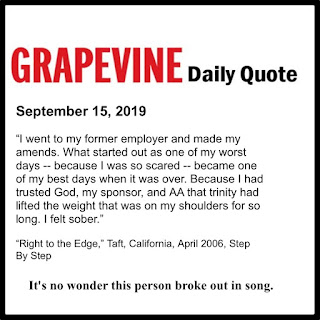 Koans and haiku used as koans have a power to transform our lives. No matter what the circumstances we can find peace of mind, and even joy. We’re all floating down a river; where it will take us we don’t know; in this moment supported by a branch it’s time to sing our songs.


Thank you Brother Toby for your inspiration.


* "Starcross Monastic Community is a small, independent, autonomous, and ecumenical community of lay-people living peaceful lives in the contemplative tradition and offering encouragement and affirmation to gentle folks on all spiritual paths."