Step 6:  Were entirely ready to have God remove all these defects of character.

Koan: “Coming and going we are never astray.”
From the Heart Sutra

Here is what we will be sitting with in June.

Step 5 -- The Whole World is Medicine

*Various translations: “Correspond to, subdue, heal or in accord with each other…” 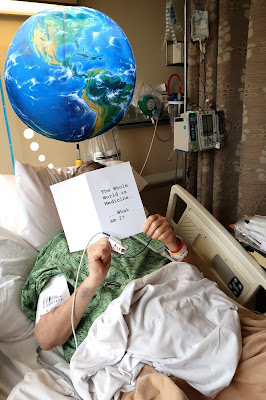 Our friend Dale is in the hospital again.  But the good news is,  he’s supposed to come home tomorrow! So far he’s had a stent put in at his heart, another stent at his gallbladder to go around gallstones. There probably will be other surgeries in the near future.  And all throughout this hospital stay, he has been sitting with this koan. He has a good story for us:

Lying quietly in bed, his eyes gently closed, he was saying this koan to himself.  “Sickness and medicine correspond to each other…the whole world is medicine… what are you?”

Immediately after he had said the phrase, “what are you?” he was startled,  hearing a loud voice, “You are one sick person!” It was one of his doctors, the one who will be putting two more stents into his left leg later on. There was Dale's answer.

Dale laughed…and had to tell the doctor what had just happened.  Yes, right now he is sick and he is open to all the medicine they offer. 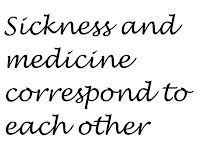 My sitting with this koan and Step began with what appeared as various opposites:  Sickness - medicine, ourselves - another human being, sponsee – sponsor … then eventually took me to an entirely different place.

My sickness, of course, would be my alcoholism and resulting behavior. The medicine I have learned (and through experience) is the sharing with another human being.  The effectiveness of this medicine comes from being completely honest with my sponsor and myself. So right now, my whole world is Step Five.

Elsie commented that she can’t be cured of alcoholism, but can find a modicum of peace and serenity.  “When I balk at a Step or with problems," she said, “I become sicker.”

Oh,  the perceived barriers I have heard over these years, real and imagined. To the sponsee, Step 5 can feel sickening…while the sponsor sees the “medicinal” qualities of this Step in the form of changes before his/her eyes.  But not always; there are those who refuse to do Step 5 – their alcoholic sickness festers with many returning to drinking in an attempt to forget or cover up these wounds.

Initially the medicine may seem worse than the sickness for a sponsee; but their trust in their Higher Power (and sponsor) carries them on, the necessity to tell the sponsor everything about their past.  To not reveal all,  to leave certain things out, is like not following through with a doctor’s prescription, as in,  “If one pill in 4 hours is prescribed, then two will be even better!” Too much medicine leads to more sickness.


Now, where do I fit in here?  What are you?  I’m just an alcoholic trying to find sobriety and get well.  The object then is to do right things to maintain recovery momentum.

Deep in my disease, not only am I sick, I’m spreading sickness.  Deep into Steps 4 and 5 I’m turning things around. Not only do I admit that I’m sick, now I’m doing something about it –
more than taking my medicine, I become the medicine for myself and eventually for others.

Elsie said, “I’m sick -- is my first thought.” It’s in the 5th Step that I found forgiveness, understanding, peace and courage to go on.