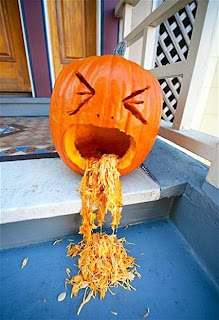 Rarely does my stomach bother me, so I probably wasn't paying enough attention to the vague unease last Monday.  Just a tinge of upset, then it would pass, only to return an hour or so later.  "It's nothing," I thought.

Fast forward to 11:30 PM. I immediately gave full attention to my stomach this time, the rumbling inside and muscle contractions and quickly dashed to the bathroom.  Knowing full well what was about to come next, embracing the toilet, then BARF!

There was a fleeting memory of past such events of long ago only to FULLY engage in the next contraction.  And what I mean by fully engage is letting go, my body was in full command and knows exactly what to do next.  I simply went along for the bumpy ride.  There aren't other choices really -- I could have begun a woe-is-me dialog but didn't.  Uncomfortableness yes, but there was some sense of ease by not resisting or arguing with the universe about what was happening here.  Instead, I went right into it ...I was the barfing...the entire world was barfing.  My response to this koan was BARF.

This continued all night long at 1 1/2 hour intervals.  I became very good at being the barfing.

Steven Grant was teaching last Monday evening (remember, I was still feeling OK then).  Since I usually arrive early to help with the setup, we talk about stuff.  In part of our conversation he asked, "You know what I tell the person who has never sat with koans?  I say take the koan to your pain."

This is exactly what we do when working the Steps!  We bring the Steps to our pain;  we bring our pain to the Steps.  This is all the more reason I believe that koans help my Step work.

Have a fun Halloween,